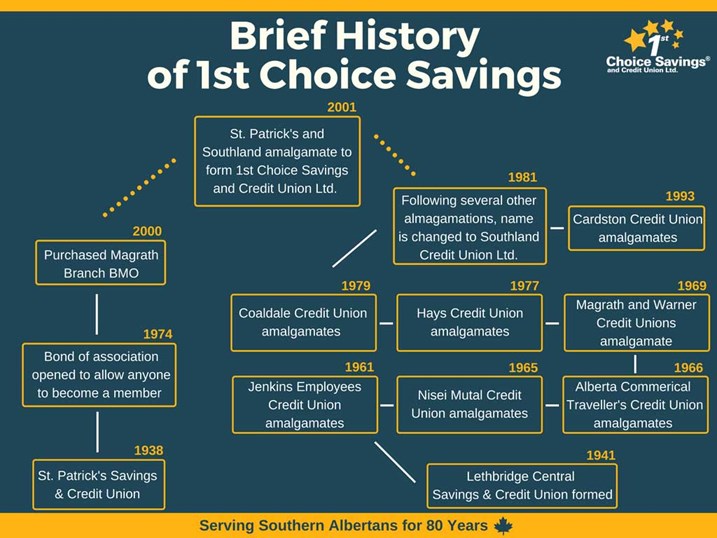 As the 1930’s were coming to a close, Albertan’s were looking for an alternate way to manage their money – taking a cue from other provinces Alberta approved the Credit Union Act allowing locals to operate small financial institutions and put the control of the local economy in everyone’s hands.

This set into motion a nearly 80-year journey that began when one of these ‘baby banks’, known then as St. Patrick’s Credit Union, opened its doors to Lethbridge in 1938.

The financial institution serves over 17,000 Members, putting people and community first, a main purpose being “To Enrich the Financial Well-Being of our Members.”

Based out of Southern Alberta – 1st Choice has 6 branches operating out of Lethbridge, Cardston, Taber, and Magrath with a history of serving the agriculture operations, families, and small businesses that make up the backbone of this great region.

While 1st Choice may offer the same products such as Mortgages, Loans, Bank Accounts, Credit Cards and Wealth Management – they set themselves apart by running on cooperative principles allowing them to offer lower fees, high quality service, and local knowledge that can’t be matched by big banks.

With assets under administration of $650 million, 1st Choice Savings is a financially strong organization with a promising potential for future growth, and proud to be Southern Albertan’s credit union.